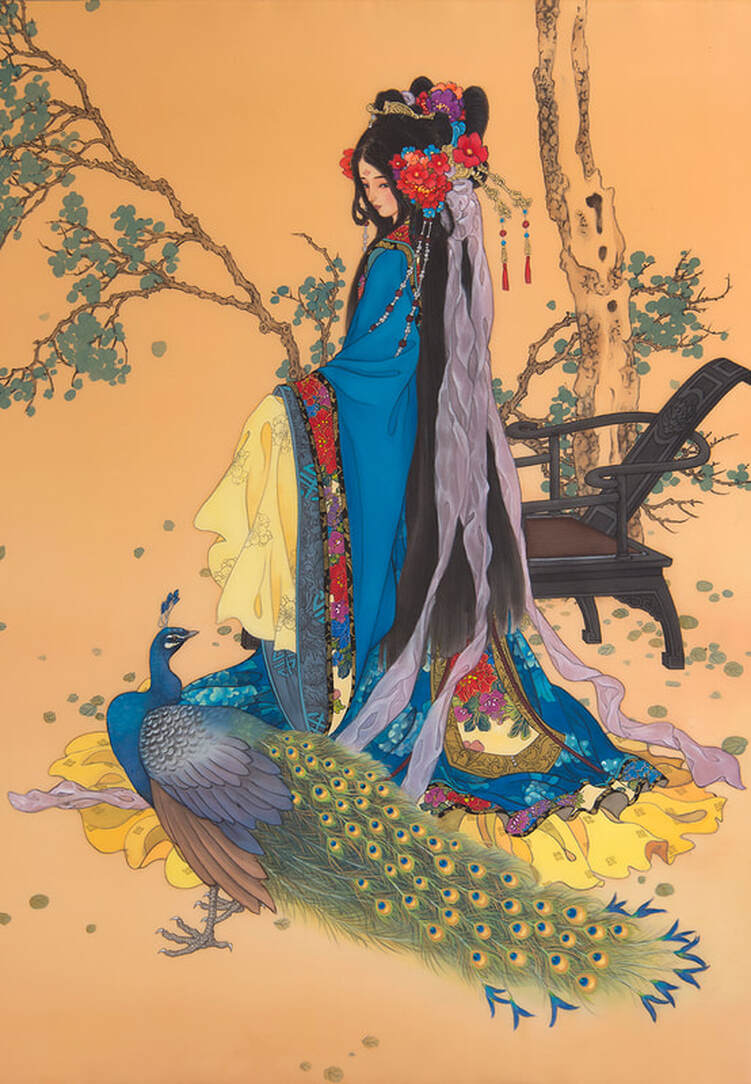 "Beauty That Shames The Moon"
"Beauty That Shames The Moon" Original
Watercolor, Acrylic, and Gouache on Japanese Silk
27 inches tall by 20 inches wide
Price $15,000  -  Plus $250 Shipping
Diao Chan was one of the Four Great Beauties of China.  Her beauty was rumored to be so exquisite that the moon would hide its face in shame when she was present.  As a young child, she had come to live in the household of Prime Minister Wangyun.  He looked upon her almost as if she were his own daughter.
This was the twilight years of the Han dynasty, when warlords fought each other for the throne.  Dong Zhuo was the most powerful, and with his adopted son, Lu Bu, fighting by his side, he was invincible.  Wangyun watched in dismay as Dong filled the young emperor's mind with lies about loyal men that stood in his way, who were executed because of Dong's accusations.
​    One evening, Diao Chan encountered Wangyun in the family garden, lost in thought. She asked the cause of his distress, and upon hearing of Dong's treachery, she vowed to help save the country in any way she could.  Together, they hatched a plan: they would use beauty to drive a wedge between two powerful allies.  Wangyun took the earliest opportunity to betroth her to Lu Bu, at the same time promising her to Dong Zhuo as a concubine.  Both men fell madly in love with her, and could not decide how to settle the matter.  As the hostilities grew, Diao Chan did all she could to add fuel to the fire, and the two men became fiercely jealous of each other.  In the end, Wangyun was able to gain Lu Bu's assistance in assassinating Dong Zhuo.